Back in Россия Again 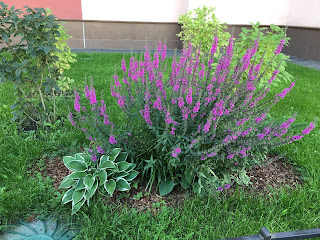 After several months of traveling across the United States, we've returned to St. Petersburg. We're glad that we can unpack our suitcases and put our clothes back into the drawers they belong in. Once again we sleep in our own bed every night. We're "home."


Upon arrival at our apartment complex, we noticed several improvements that happened during our absence. The maintenance staff added flowering plants to our landscaping in front of our building. Hostas, ivy, ferns and something that reminds me of sage now grow in the lawn area between the entrances of our apartment. 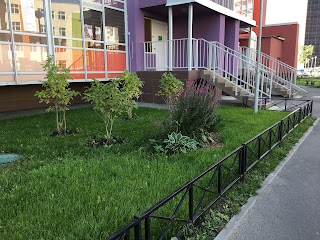 Since the growing season is so short here, I don't know how well they'll do from year to year, but they are a welcome addition this summer.


The trees growing behind the new flowers were planted last summer, but as you can see they aren't very tall yet. At least all four of the ones in the picture are still growing. So many of bushes and trees didn't even last the first winter.


The grass recovered rather well this summer, also. There were several places that had to be replanted after the winter, but at least it's green. I must admit that some lawns are 50% clover and other weeds, but it adds color to our community. 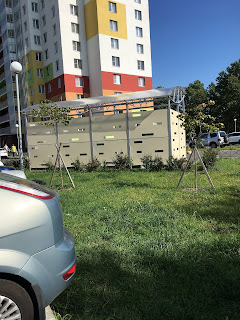 Another welcome addition to our complex were enclosures around our trash bin areas. The light-colored walls now hide the bins that tend to overflow too often. The small roofs that cover the bins should be an added bonus for the men who have to empty the bins. I can't imagine how heavy those bins got when we had days of rain or snow last winter as they sat open to all the weather. 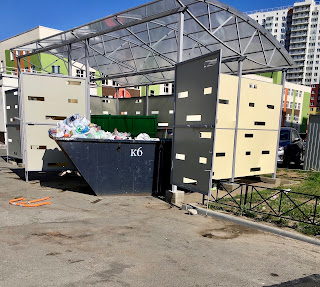 The only problem now is that the truck that delivers the large trash bins doesn't drop them inside the enclosure where they are to be stored.  If the unsightly trash is still sitting half-way out of the area, the whole structure is pretty much useless.