By connie cortright.com January 28, 2020
This week we will be using several days to pack up our belongings and head to our next home in Riga, Latvia. Before we leave the great city of St. Petersburg, I wanted to share with you a few things that we saw here that surprised us. Things we never expected to see while living in Russia.


Shortly after we moved into our apartment, I was walking through a mall nearby. I nearly laughed when I saw a vendor selling Tupperware at a kiosk. I would have never guessed that I'd see that here. I didn't find out the price of the items since I didn't know enough Russian to ask at the time. I imagine it was very expensive to ship Tupperware products to Russia. That proved to be the case when the kiosk was filled with a different item a couple months later. Tupperware wasn't the big hit that someone thought it would be. 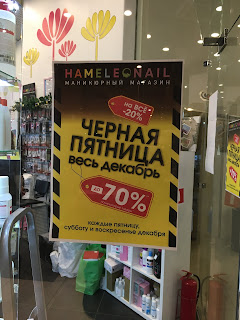 We were surprised to see advertisements in all the stores for a special day of sales - Черная Пятница. Translated that mean Black Friday. The date of this special sales day corresponds to Black Friday in the US, but there is no Thanksgiving Day prior to this huge sales day. The day prior to Black Friday here is a regular work day. How did this get imported to Russian business? 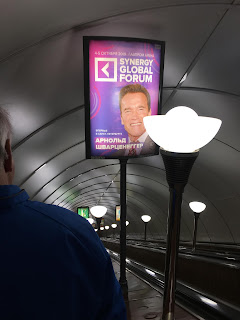 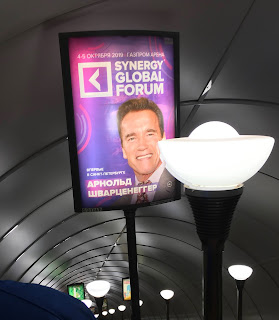 Several months ago I saw this ad as I was riding down the metro escalator. I quickly took a picture and then snapped another one as I approached the poster. Sure enough it was Arnold Schwarzenegger. He was presenting at a forum here in St. Petersburg. I never thought I'd see his picture here on an ad. Small world, isn't it? 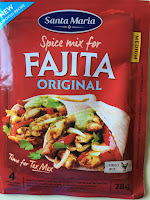 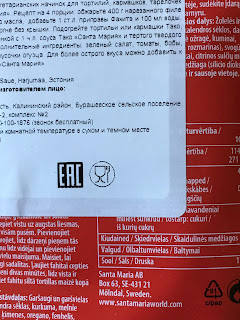 When I'm shopping in a grocery store, I'm so used to seeing packages that I can't read because of the Cyrillic writing on them. I'm not too adventurous purchasing food because I have no idea what it is or how to prepare it. When I saw the product on the right, I was thrilled. Finally something that I can make here. Unfortunately, the directions on the back were still written in Cyrillic, covering up the real package directions. That was a surprise. I managed to make them anyway because I remembered how to make fajita packages from using them at home. It was yummy in the end. 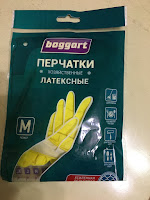 The next picture isn't a surprise at all. They have rubber gloves here for doing housework just like in the states. The surprise about these was that when I got the gloves home, there were three holes in them already. They were completely useless. But of course, it's Russia. I shouldn't have been surprised. After all their saying always pops out at us: "Life wasn't meant to be pleasant."