While we were in Italy, we stayed for two days in Ravenna where we saw the most beautiful mosaics in the world. These amazing mosaic pictures and ceilings were built 1400 years ago.


There were five buildings, constructed in the 400s and 500s, that displayed the amazing mosaics. Of course, the pictures, constructed entirely of mosaic tiles, depicted Christian religious history since the buildings were two basilicas, a mausoleum, a baptistry, and a museum that was formerly a cathedral.


The mosaics were still as clear to see as if the tiles had been attached to the walls only a few years ago. The one mosaic pattern that I thought was most beautiful was the blue ceiling pictured above. This was located in a mausoleum built to hold the body of Galla Placidia, the daughter of the Roman Emperor Theodosius I. Not surprisingly, the building is very small. 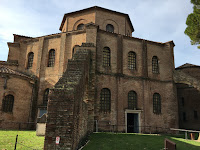 On the other hand, the Basilica di San Vitale is very spacious and beautiful. The entire chancel is covered in detailed mosaic pictures telling the Bible stories of the Old and New Testaments. 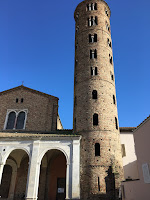 The outside of the basilica with its majestic tower was just as impressive. This world heritage site was constructed in 500AD. It's amazing that the building is still standing after that many years!


The Baptistry of Neonian was again a very small structure. The octagonal shaped space held a small pool that was formerly used to baptize new believers. However, it contained beautiful mosaic pictures on the walls and ceiling.

The last place we saw mosaics was in the former cathedral now a museum. Hidden on the second floor of the museum, we found a small chapel that had been preserved from the ancient cathedral, containing mosaics on the walls and ceilings. I need not say more, but show you some of the scenes. 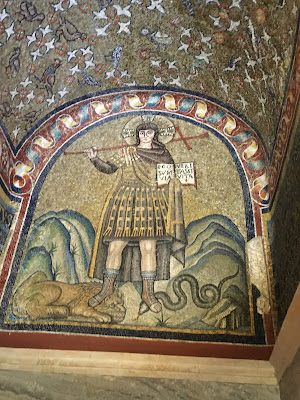 My husband called Ravenna "the Disneyland of Christian historical art." He couldn't believe all the scenes that he had previously only seen in books about Christian history.

I just loved the beauty of the mosaic art. I was amazed at the detailing of the decorated areas between the Biblical pictures.


If you want to have a better perspective on all of these places, click on this link and scroll down for a video that gives you an overview of the beautiful Ravenna Mosaics

Make sure that you schedule a trip to Ravenna on the Adriatic Sea if you ever go to Italy.