Another View of Riga

By connie cortright.com June 16, 2020
Since we had a lovely sunny day last Saturday, my husband and I decided to do a bit of exploring in Riga. We boarded a city bus and headed north to Mezaparks. We knew that the zoo was located in this area, and I'd heard that there were some beautiful houses up there.

What we didn't know is that this part of the city had a beautiful lake bordering Mezaparks. After our wander through the streets of the neighborhood, we found a cafe where we could relax and have a few refreshments. The wind was strong with whitecaps on the surface of the lake, but it was beautiful. 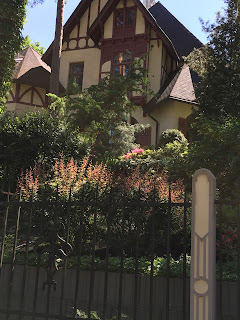 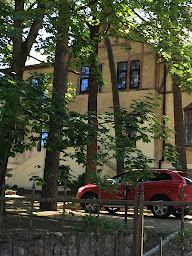 But, I'm getting ahead of myself. When we found the correct bus stop, we did indeed find the area where the rich people of Riga lived. The massive houses were all locked behind gated fences, but I managed to get pictures of some of them to share with you. 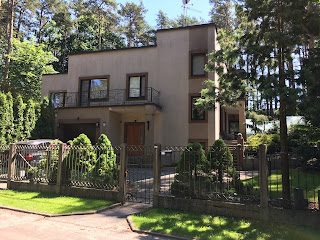 I found out that this neighborhood was originally built in the 1920s and 30s. I wasn't surprised to see that several of the houses were very different from the norm with very square shapes. 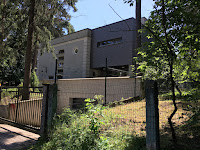 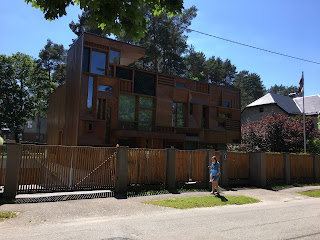 The name of the street that all these houses were built on was Hamburgas iela. I wondered if this area had been influenced by settlers from Hamburg, Germany. 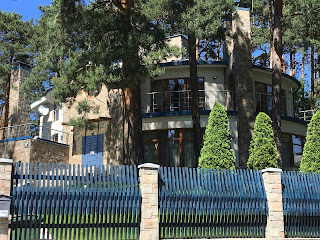 Mezapark is Latvian for Forest Park. We could see why it was named thus since all the houses were built between tall, stately pine trees. 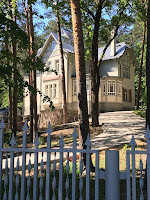 Sometimes it was hard to see the houses because of the numerous pines surrounding them. The result was beautiful overall. 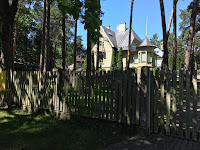 We were glad that we explored this area of the city. We're sure we'll never know anyone who lives in Mezapark, but it was fun to visit.


The sad part was seeing all the neighborhoods in between. Most of them reminded us of what we saw while living in Russia. We're very glad we live in the Old Town and don't have a great urge to explore too much farther than the distances we can walk.