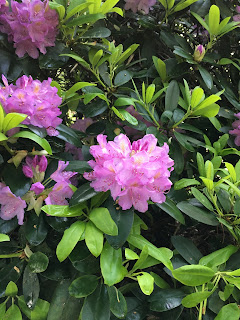 A couple weeks ago, some Latvian friends took us to a Rhododendron nursery. It was the 29 acre University of Latvia Botanical Garden built in a pine forest. 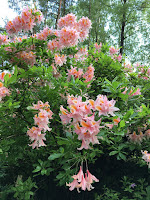 In 1980 a professor of botany started this collection of Rhododendron plants in a town about five miles from Riga. He worked with the UL to expand his collection until his death in 2017. Now his son has taken over the care of these beautiful plants.

When they bloom during late May and into early June, about 25,000 visitors come to see the many blossoms. We walked through the paths around the gardens for almost an hour. It was amazing to see thousands of Rhododendrons in so many colors. I'll show you as many as I can. 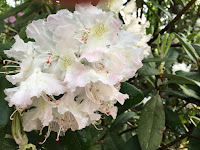 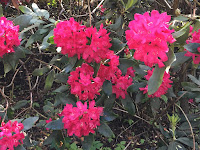 I was amazed to find the bushes so large. Some of them reached at least twelve feet tall. We wondered if the tall pine trees growing around them helped to shade the plants from the hot sun, encouraging them to grow so large.


As we wandered among the plants, I noted that there were Rhododendrons brought to Latvia from USA, China, Japan, Germany, United Kingdom, Netherlands, Czech Republic, and even one from Wisconsin, my home state.

It rained hard the morning that we were planning to visit the gardens. We weren't even sure that we would be able to get on the grounds that day. By the time we went, the sun was shining, but we saw the evidence of the hard rain earlier in the day. The fallen blossoms made a carpet under some of the plants.

The university even added a pond in the middle of the nursery to enhance the beautiful scenery. It was something that I won't forget for a long time.