By connie cortright.com October 22, 2019
Living in St. Petersburg has broadened my knowledge of Russian authors and this week a Russian artist. His name is Ilya Repin. Born in 1844, Repin was to Russian art as Tolstoy was to Russian literature. When I was in school, I was familiar with Leo Tolstoy's writings, but somehow my education never got as far as Ilya Repin's artwork, however.


That all changed on Thursday when I attended the exhibition in honor of the 175th anniversary of Repin's birth at the Russian Museum. 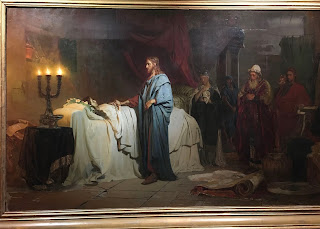 The first painting that we came across in the exhibition was "The Revival of the Daughter of Jarius."  It was nice to see this picture, displaying Jesus' miracle, as most important to the museum.


The exhibition included 250 paintings and graphic works of Repin. Many of the works on display were portraits that Repin completed for famous Russians of his time including Czar Nicholas II. Other portraits include Leo Tolstoy, Alexander Pushkin, Nicolay Gogol, and Alexander Kerensky after the 1917 Russian Revolution.


The most interesting portraits to me were the ones of his family. He and his wife Vera had one son and three daughters. The pictures of his daughters were so life-like that I thought they would start to breathe. He surely lived up to his reputation as a "realist painter." There were other paintings of his wife and children (such as the family walking through a field) that I would love to have on my wall at home.


Repin is most famous for his realistic painting named "The Barge Haulers of the Volga." In 1870, he spent time in the Volga River region painting landscapes and studying the men who pulled barges up the river. The result was this painting which received a gold medal the following year. You can see pain and agony written on the faces of the men as they strain against the straps in Repin's picture. It's a great depiction of the life of Russian peasants during the rule of the Romanov Czars.
It was definitely worth going to this exhibition to expand my knowledge of this Russian artist (even though I had to stand outside in the cold rain for almost an hour before we got in the door). Those pictures will be something I take with me in my memory for years to come.