By connie cortright.com October 01, 2019
And guess what. It's not about President Trump and impeachment! People in Ukraine aren't concerned with the phone call between Trump and their president.


We've been sitting in Odessa, Ukraine for the past week and a half while my husband was doing a seminar here. I took the opportunity to visit several churches of the city and will share what I saw with you.


The main religion here is the Ukranian Orthodox Church which is similar to Russian. We stopped in the cathedral in the city. It was very beautiful on the inside. The arched ceilings were decorated with pictures and gold ornamentation. 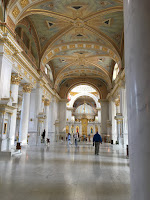 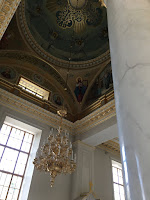 Domed ceilings and golden chandeliers lined both sides of the main altar. It's a very impressive structure. However, as always with orthodox cathedrals, the building struck me as empty. Few people were worshipping, leaving the entire building virtually deserted.


Orthodox churches do have one thing that is unique. The iconostasis separates the people from the altar area. The wall of icons and paintings adorning the front of the church was very awe-inspiring.

We also visited a Catholic cathedral in the city. Immediately upon entry we could see that it wasn't as majestic as the Orthodox Church, but it felt welcoming. Maybe the addition of the pews made me feel more at home. I felt that the simpler side altars told the story of the Bible more than their golden-domed counterpart.


Finally, I will show you the Lutheran church where my husband was working. St. Paul's Lutheran Cathedral was founded by a large German community in 1825.

During the Soviet occupation, the building was used as a youth hall. The Soviets located bathrooms in the area where the altar was located. Because of bad plumbing, this entire area of the church had to be abandoned after restoration.

As a result, the front of the church had to be restructured into a much shallower altar area. The symbolism on the wall of the chancel is the blood of Christ in a chalice, a wafer, and the water of baptism flowing out of these. The artist's modern artistic symbolism is very much Lutheran.

It makes for a simple declaration of the truth of God's Word without all the gold found in other cathedrals.