By connie cortright.com July 03, 2018
I'm sending you a picture postcard from St. Petersburg this week. We arrived last Wednesday, so I've only walked around the city a bit and taken these pictures. I don't know anything about the buildings, yet though.

It was a beautiful warm day when these pictures were taken - close to 80. What a welcome to this beautiful city. We haven't seen the sun since, however. It's been in the 50s now and cloudy and wet. We didn't move here for the climate. 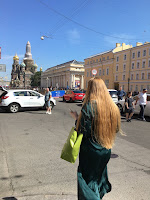 The city was built in the 1700s by Tsar Peter the Great. Because he hired engineers, architects, and builders from European countries, this city in Russia most resembles the cities of Europe like Prague and Berlin. Peter the Great wanted to make St. Petersburg a more modern city than the rest of Russia. 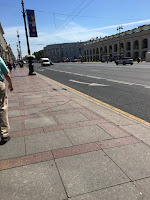 Many of the streets in the city center are lined with massive old buildings and palaces that today are government buildings or apartments. We are temporarily living in one of these apartments until we find our permanent flat. 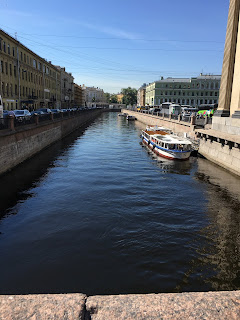 Peter the Great basically reclaimed the land for this city from swamps. Because of that, the city is criss-crossed by canals and rivers. We heard there are over 300 bridges in St. Petersburg. For that reason, it's sometimes known as Venice of the North. I already made a goal to take a river boat trip someday while I'm here. 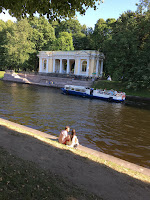 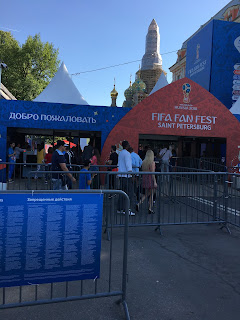 Currently, St. Petersburg is inundated with soccer fans from the FIFA World Cup tournament. We've heard that tickets to a game can cost around $900, so the closest thing we've come is walking past the FIFA Fan Fest area in a town square. It will be very interesting to see what the real St. Petersburg is like after the soccer fans are gone and all the memorabilia is put away. 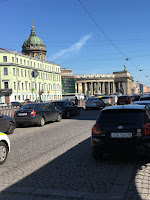