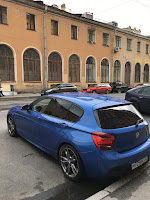 When we arrived in St. Petersburg in late June, we lived in an apartment in the center of the city while we searched for our permanent flat. Since it was in the city center, the building was probably built more than a hundred years ago. 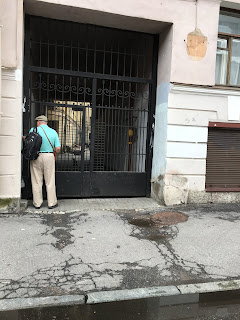 Since it's so old and not in a tourist area, the neighborhood is a bit run down today. As you can see, the buildings need a coat of paint and sprucing up. But it is very safe.

The security system was obviously from the Soviet style era. My husband said that he saw the same thing when he was in Ukraine in the 1980s. 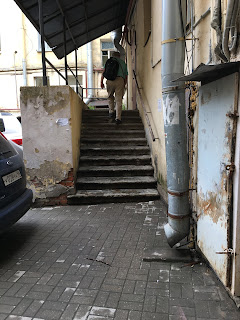 There were several locks that we needed to get through to enter our apartment. There was an outside gate to the courtyard that was accessible by a code, or could be opened for a car to enter.

To access our apartment, we had to climb some crumbling stairs and were then faced by an old metal door. I had to swallow twice when I faced this the first time. What were we getting into? 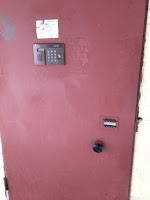 The metal door had a key pad on that was opened by touching the coded fob to the correct spot. It seems like these doors are magnetized and only open when the magnet is blocked (or something like this.) 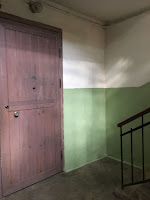 Next we faced the "common area" where the mailboxes were located and had access to individual apartments. The floors and stairways were cracked cement. Not too inviting. 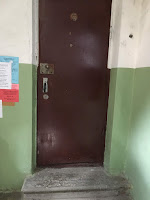 We finally faced the door to our flat - another metal door with just the locks on it. At least I knew that there was no way anyone would break into our flat through that door. After we opened the outside metal door, we faced a normal looking wooden door. We had now finally reached the flat. 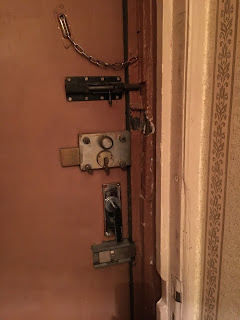 From inside the apartment, the door looked like a fortress where no one was allowed to enter. The system of locks included a chain lock, a deadbolt, and a sliding metal bar. The previous owner must have been somewhat paranoid about people breaking in. 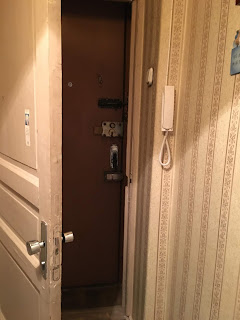 Finally when the inner wooden door was closed, we felt like we were in a normal apartment again.

As our first introduction to Russia, I guess I shouldn't have been too surprised by what we found. The people who lived in this apartment many years ago maybe needed all those locks.

Life has returned much closer to "normal" since that first day.  We've found our new apartment and moved out of the temporary one. Stay tuned next week so see our permanent flat.