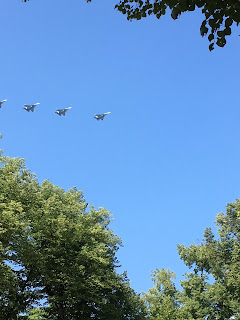 Sunday was Navy Day in Russia. We had no idea that it was happening until the navy jets flew over our Russian school last week practicing for the fly-over. Our Russian teacher told us that the last Sunday in July is always a day to thank and honor the Russian navy. 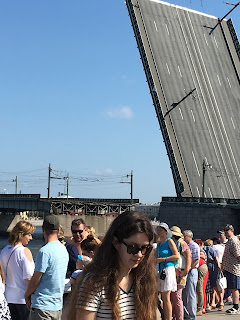 We were in the center of the city for church that day, so we decided to walk down toward the Neva River to see what was happening. When we were at the river bank, we saw one of the draw bridges open with the road closed, so we knew we were at the right place. I've never seen a 6 lane draw bridge open before - with light poles sticking up in the air. That in itself was quite a site. 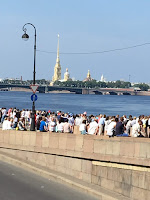 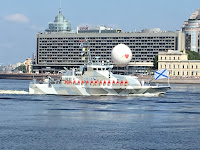 As we approached the river, we could see that both sides of the wide river were lined with people waiting for the navy parade to pass by. As we walked along the river toward our metro stop, we saw the Russian navy parade, which was rather impressive. The boats turned into ships the longer the parade lasted. 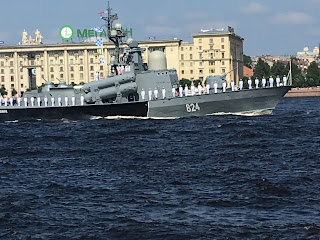 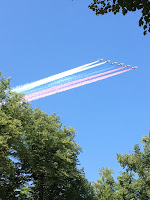 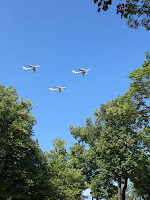 By the time we reached our turn off to head toward the metro, the ship parade had ended. Then the naval air forces got in the act. It was rather impressive all in all - and noisy. The crowds of people loved it, clapping and cheering when the jets passed overhead.
The fun started as we were walking in the direction of the metro station. We could see more and more people on the road down the street. All the streets in the area were closed to traffic and the crowd kept growing. Of course, 85 degree sunshine can be rather daunting in a crowd of people who were all heading home at the same time.

When we arrived at the first metro entrance, we saw that it was packed with people and an announcer said something - which we couldn't understand, of course - so we decided to try the next entrance a block away. We marched down the middle of the street with the hundreds of other people going the same direction. As we neared the next entrance, we were able to get down the steps, at least, and into the tunnel leading toward the metro station. The farther we walked, the faster the heat rose. When we turned the corner, we saw the mob of people on the other side of the glass door awaiting their turn to go down the escalator to the metro. I looked at my husband and said that I couldn't go into that crowd in that heat, or I'd get a major attack of claustrophobia. We turned around and climbed the stairs back to fresh air.

After finding a bench to sit on in the slight breeze, we watched hundreds more people pass us by going the same direction. They had been down the river farther in the midst of the crowd watching the parade. We had no idea that this part of the crowd even existed. As we sat on our bench, several police cars with sirens passed by on the still-closed street along with a couple black limousines. I remarked that some big-wig just went by and my husband said, "It was probably Putin." (When we arrived home, I checked the internet to do research for this article and found out that President Putin did indeed speak at the waterfront today - so I'm sure it was him.)

We decided to walk to the next tram station down the road to avoid the overheated crowded station, so trudged another mile to that place. Finally, after walking over 3 hours in the heat, we managed to get home on the circuitous route. To recover, my hubby had to soak his tired swollen feet.

Lesson learned. Never again will we attend a national event like that. From now on, our motto will be: avoid any event that a million of other people are attending at the same time.

At least, we both had a good night's sleep that night!