A Lavtian or Soviet Monument?

By connie cortright.com March 31, 2020
When I first saw this monument standing in a square in Riga, I thought it was a left-over of the Soviet era when Russia ruled the Latvians. I was actually surprised that the Latvians hadn't torn it down after the occupation was over in 1991. I now admit that I was wrong.


This monument, labelled The Freedom Monument, was built in 1935 by the Latvians to commemorate the freedom that they won in 1920. Before that, Latvia was ruled by Russia, Poland, Finland, or Germany in different periods of time. Finally, after World War I, the Latvians managed to throw out the foreign armies and gain independence.


Two years later they wrote and adopted their constitution. The people of Latvia collected donations to build this monument as a remembrance of the people who died in the battles of 1919 and 1920 to gain the freedom. The 42 meter tall monument is inscribed with the words "For Fatherland and Freedom" on the pedestal. 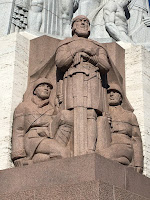 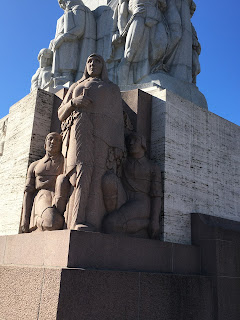 The base of the statue is surrounded by 56 large sculptures showing scenes from Latvian culture, folklore, and history. It's very impressive since the area around the monument is an empty square flanked by a green park. One's eyes are drawn to the monument if you're anywhere in the vicinity. 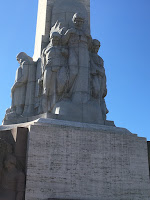 The image on the top of the obelisk is the same image of freedom that we have in the Statue of Liberty. A woman stands on the pedestal with arms raised, holding three stars that symbolize the three historic regions of Latvia. 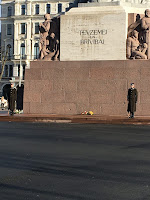 Like the palace, this monument also has two soldiers guarding the structure.
It's impressive to see the changing of the guard in two different places in the city of Riga - the palace and this monument. I enjoyed witnessing this event at both locations already. The military precision is quite a spectacle.

I wouldn't want to stand in one place for hours, though, before my replacement arrived. That would be a very hard job for me to do.


I'm glad the USSR didn't destroy the monument when they took over Latvia again after WWII. Maybe they didn't because it looks so much like the many Soviet monoliths we've seen in Russia.

Information taken from "Riga: Journey through the Centuries."