Theorbo? I Learn Something New Everyday

By connie cortright.com March 10, 2020
We attended a Baroque concert a couple weeks ago in the Dom Cathedral very close to our house. The concert was located in a small room off to the right of the main worship area.


The room was packed with people who came to hear the music of a cello, violin, and organ from the Baroque era 1600s - 1700s. The other instrument was a surprise for me. It was called a theorbo, which is a lute-type instrument from that era.


The uniqueness of the instrument is the length of the neck. It's a fourteen stringed instrument that looks similar to a guitar. Because of the length of the neck, the theorbo has two distinct length of strings attached to it. The higher notes are plucked from one pegbox in the middle of the neck. The second pegbox at the end of the long neck allows for the low notes to be played along with the higher notes that a normal lute can play. 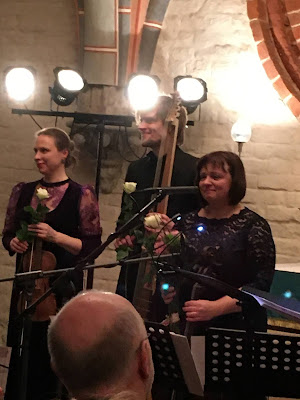 As you can see from the picture on the right, the theorbo was as tall as the man who played the instrument. I'd never seen one before this concert. I knew then that I had to share this with you all.


To hear a sample of theorbo music, click on the link: Theorbo music sample You really need to hear what it sounds like. Of course, this isn't the same person that we heard at the concert or the same setting, Enjoy!