The two largest churches in Old Town Riga are both part of the Latvian Lutheran Evangelical Church.  Both of these churches have history back to the 13th Century. Of course, they were part of the Catholic Church when they were built.


The tallest spire in Old Riga belongs to St. Peter's Lutheran Church, started in the early-1200s. It was the main house of worship, or city church, for the residents of the city back then. 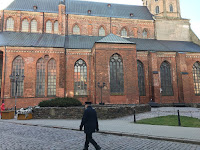 Many changes and additions have taken place since the original building, including a baroque-style facade added in 1692. The massive red brick interior is shown below. Pictures can't do justice to the enormous size of this church.


The other large church in Riga is the Riga Cathedral also known as Dom Church. It sits in a large empty square a ten-minute walk from St. Peter's.


Built in early 1200s, the Dom Church was originally built as part of a Catholic monastery. Today it is the church of the archbishop of the Latvian Lutheran Church.

Since the Dom Church is two blocks from our home, we have been worshipping there the last couple weeks. It's awe inspiring to sit in this huge building, hearing the voices of the choir echo off the walls. Even though we don't understand the words of the pastors reading Scripture and preaching the Word of God, we know that our fellow worshippers believe in the same Jesus that we do.


The beautiful organ in the rear of the church was designed and built in 1884. At the time it was built, it was the largest organ in the world.

Shortly after the beginning of the Reformation, Riga became one of the first cities to adopt the Lutheran religion of Martin Luther. All the Catholic Churches were taken over by the city and changed into Lutheran churches. That is why these large churches are all Lutheran today.

As I sit in these large worship spaces, I often wonder how many people worshipped in the 1500s. Even if every person living in Old Town Riga attended church on a Sunday, I don't think the churches here would be filled.


Today a congregation of possibly 150 people is scattered in the large, mostly empty space of the Dom Church on a Sunday morning. It's sad to see these beautiful historic churches so empty on a Sunday. Will there ever be a time when no one worships at all in churches like this?