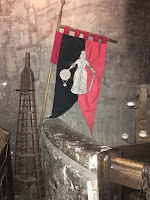 When we moved to Riga, we knew that we were going to be living in a much older city than St. Petersburg, but we had no idea that we'd be able to experience the history first-hand. A couple weeks ago, we went to a restaurant that took us back to Medieval times.


When we first walked in the door, a banner with a knight greeted us. Other ancient artifacts from Medieval Times decorated the area. How would you like to wear one of the helmets on the left?


We found out that this basement restaurant was first a wine cellar built in 1293. Today it's a restaurant named Rosengrals. 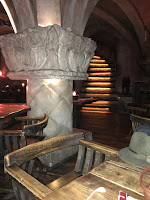 The low arched ceilings and squat stone pillars attested to the history of the building. The lighting in the restaurant was mainly candles which caused a  dark, mysterious atmosphere.

In the middle of the restaurant was an original well, built to help in the wine-making process. Used as a wishing-well today, it adds to the ancient ambience. 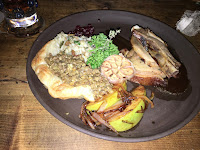 Everything on the menu was described as ancient cuisine from around the time of Elizabeth I or earlier. We ordered spit-fired pork served with barley It was an interesting experience tasting the food, but I have to say it wasn't my favorite meal. Without question it is worth going just to feel history surrounding you.


We heard that during WWII, the buildings near the restaurant were destroyed by a bomb. The rubble of the ruins were pushed into the old wine cellar to get rid of it.


Years later, the locals started removing the rubble and discovered again this magnificent wine cellar. It was restored as close to its original state as possible and opened as the restaurant it is today.

Of course, we ate in this atmosphere in February when there were very few people around. I imagine that in summer with the place filled with tourists, the experience would be more realistic yet - loud and boisterous. I can't wait to find out!